Harems were quintessential part of the Mughal’s palace. Last time I went to the Akbar’s Tomb in Agra, I observed the Harem Quarter was outside the immediate premises, I have seen Harem Quarters in other Mughal palaces too like the big one in Fatehpur Sikri. But the one in Akbar’s Tomb was small and it intrigued me as to why there’s a quarter in the mausoleum? Though the panel outside the structure said it was a Harem but later was used as ‘Hunting Lodge’ by Jahangir.

And, in a quest to find out more here is what I discovered and it’s worth sharing.

‘Harem’ is derived from the Arabic word ‘haram’, which literally means sacred or forbidden / sacrosanct. Harems were separate quarters (proper living spaces) for women and the entry to these quarters was strictly prohibited for men other than the Emperor. The Emperor was the only adult male who entered the harem freely.

Ain’t it beautiful enough to catch your attention! Just observe the intricate work executed with Jharokas, borders, balconies; To have such Mahal as your home, not a bad idea I say 🙂

There has been a lot of speculation about this part of the palace as first hand information was never available to historians. The second hand information was was laden with exotic notions, whims and fancies. This was because the outside world couldn’t fathom the arrangement of having separate living area for women folk under the same ceiling. Here is more about the subject :

The Architecture The complex was enclosed within high walls, keeping observance of purdah system (covering face with a veil) and was crafted beautifully with motifs and designs. It consisted of a central hall which was left opened to sky (known as Angan), this was done to make the Palace airy and comfortable. All the apartments were interconnected. There was only one strictly guarded entrance door to the harem. 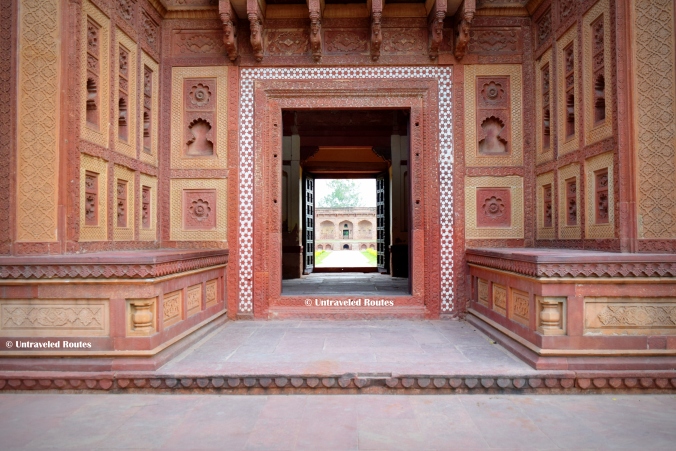 Well, last time when I shared the pictures of magnificent Akbar’s Tomb I kept back few which showcased the peaceful premises and here they are – 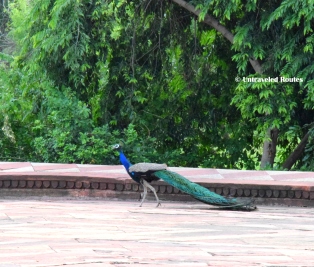 As colorful as it can get! India’s National bird – Peacock roams around freely in the premises.

May the beatific premises of Akbar’s Tomb stay as it is if not better! Since Agra gets lots of tourism because of the presence of Taj Mahal, Government is comparatively active here to ensure decent condition of all the heritage monuments.

Sometimes, as I visit these places and write about them, I go back in time, can’t refrain from visualizing how things must be back then, what was it’s like to stay in gigantic palaces and live a King’s life. Decades back the same part of Earth I’m standing on witnessed historic events. It’s so absorbing!!

Have you ever experienced that feeling ?

43 thoughts on “Why Mughals had Harem Quarters?”