The Art of Marble Inlay

Posted on September 15, 2017 by Untraveled Routes

Art is that powerful form of expression that knows no boundaries, no geographies and no limitations!!

The Art of ‘Marble Inlay’ originates from the Mughal Inlay Art and blossomed beautifully in the age of Mughal Empire. The Marble Inlay Art is indigenously identified as ‘Pachchikari’ or ‘Parchinkari’. It implies the delicate and exquisite process where marble is inlaid with designs in precious or semi-precious stonework. This form of Art is peculiar and one will find it only in Agra and parts of Rajasthan in India. The skilled workers (‘Karigars’) carve incredible designs with their hands and it takes months to complete a piece, and in the process the Karigars survive injuries to the fingers. There is huge demand for the end products in foreign markets and the range of the sale price depends from piece to piece.

This one needs no introduction 🙂 The Miniature Taj Mahal looks so impressive.

The Monuments of Agra showcase the different development stages of Mughal Inlay Art in a progressive sequence spanning from 16th to 17th century as practiced under Akbar (r. 1556-1605), Jahangir (r. 1605-1627), and Shah Jahan (r. 1628-1658). However the Marble Inlay Art evolved and progressed during the reign of Jahangir, the application of same can be seen in the monuments that were completed in the period of his reign.

It is believed that the inspiration for this form of art was drawn from the distinctive monuments of Mandhavgarh in Madhya Pradesh. Mausoleum in the Ashrafi Mahal and the Tower of Victory in Mandu are the earliest examples of inlaying with rare stones in Mandu and their construction dates back to first half of the fifteenth century though the Asharfi Mahal is in total ruins today.

Jahangir had interests for fine arts and cultural activities. Jahangir encouraged and promoted ‘Marble Inlay’ art and its application can be seen in Jahangiri Mahal to Akbar’s Tomb and then in Tomb of Salim Chisti and Itmad-ud-Daulah’s tomb in Agra.

Today, Marble Inlay art is integral part of Agra’s heritage and its presence can be widely observed in the forms of Tabletops, Lamps, Miniature Elephants, and Miniature Taj Mahal and possibly everything that one can imagine. 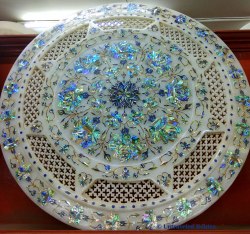 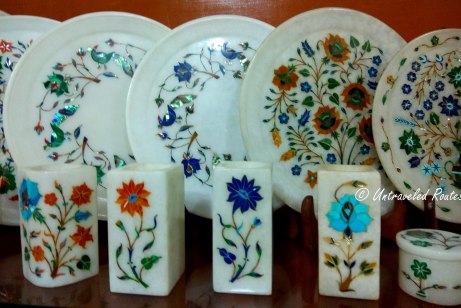 So, next time you’re in Agra, do visit a workshop if possible, you’ll be amazed at the process and do pick a beautiful souvenir.