What doesn’t kill you, makes you STRONGER!!!

Posted on October 10, 2019 by Untraveled Routes

I have been down and away for far too long, to be precise, over a year. My blog deserves this post and this post is dedicated to the most unpredictable year I had.

“Life is unpredictable!” Yes, we all know that, but I never resonated with this quote until the biggest shock of my Life swept me away in February 2019.

Let me take you back to November 2018, I was so regular for my run that I surprised myself on several occasions. I got hooked on to running as it just liberated me and made me feel much more confident and positive about Life. And yes, helped me to keep away from depression (induced by unexplained weight gain post partum).

I couldn’t believe I could run 10K straight, provided I never was the athlete type. On an average I was able to do 10K+ and maintained a good pace. This was the time I thought I’m ready for my first Marathon. However, destiny had something else in store for me.

On 20th November 2018, I rolled over my ankle while warm up, there was no pain but yes some popping sound. I ignored it. I was back to my routine on the very next day; I ran, ran and ran for three days. On the evening of third day, my left ankle was swollen beyond recognition. Just when I thought my ‘Life’ was getting back on track, I was pulled out of my dream world. For the first few days I assumed it was just another sprain. So I rested, put a bandage and did countless ice-pack sessions. But things did not get better.

I had the first doubt that this is not just any ankle sprain because in last three years I survived lot of injuries and most of them healed in ten, at most 15 days.

To make things more complicated, my younger brother’s wedding was approaching, just a month away. It was planned for January 2019. Now, I knew that if I began treatment, rehabilitation and recovery is going to take lot of time and I might not be able to participate in my only brother’s wedding. With the upcoming wedding of my younger brother, I just couldn’t fathom how I could begin the treatment and this probably was my first mistake. I attended all the events just as normal. I was beyond happy for my brother, he got hitched to his childhood sweetheart
(Literally! They have been together since IX standard).

I did not want everybody’s attention on my injured ankle rather than the wedding. And In India, weddings are a big deal (Haldi, Mehendi, Engagement, Wedding, Post Wedding rituals…). Since, my brother’s soul mate is a Malayam Brahmin, there were two weddings planned, one as per South Indian rituals and other as per North Indian customs. All the events were amazing and filled with moments to be cherished forever.

Now, I decided to participate in the wedding wholeheartedly and go to the doctor first thing when I’m back in Delhi. I ignored the constant pain and swelling for over two months.

As soon as I was back in February 2019, I went to the specialist, he was shocked that how I managed to even walk, and according to him my ankle was broken. At this point, my mind was telling my heart – ‘See, I told you there’s something gravely wrong!’

My heart sank. The only answer to all the doubts was Magnetic Resonance Imaging (MRI). My first MRI was scheduled for February 26, 2019, following day I had the report in my hand and my worst fears came true!

And there were other serious issues mentioned as well like edema and attenuation at various places. It took me a while to actually believe it’s my report and things are critical. Fortunately, the tear was partial though Grade II, so there were hopes to recover through conservative methodology. Doctors ruled out surgery as ankle is a super delicate joint and it could have worsened the situation.

Anybody who has encountered a situation even remotely similar to this would know that ligaments connect bone to bone and without them moving is an uphill task. Moreover, bones heals faster but ligaments take more than six weeks to just begin healing. And even after that, it takes months, sometimes years to gain full strength and flexibility. And I had three tears.

At this moment, more than the ankle, my heart was blue, bruised and swollen 😦 I was devastated, not just because I couldn’t walk then but I didn’t know whether I will be able to walk normally ever again.

Since I already lost the critical time for immobilization, doctor decided to give me Platelet Rich Plasma (PRP) injection and put a plaster cast for 6 weeks, followed by bed rest for another 2 weeks. And countless weeks of walking with support of crutches and wheelchair. 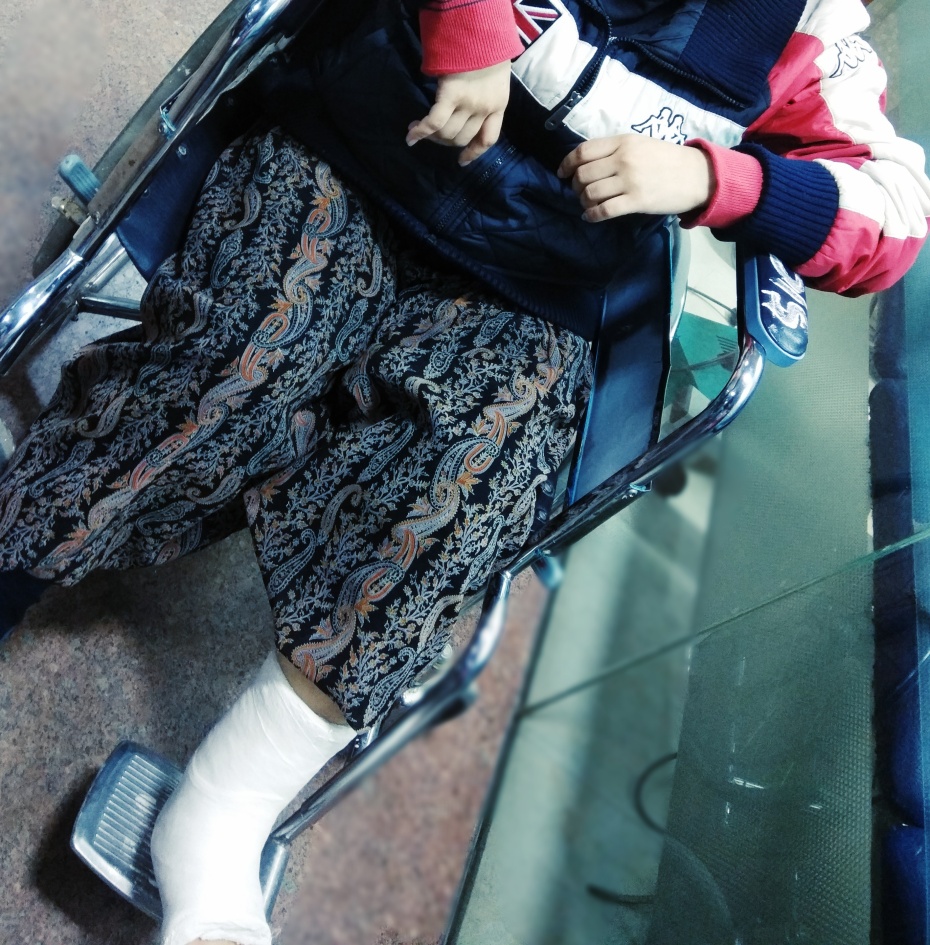 Those were one of the most difficult times of my Life; I couldn’t even go to the washroom unassisted and was dependent on others for most part of my day. My family’s continued support held me together. My little one’s care and understanding is beyond explanation. When I had the plaster on, he was just 3.5 yet the most settled and co-operating soul.

I will write about struggles to stand and walk on two feet again in another post. It was an incredible feeling to be able to feel the other leg again!!

Since February 2019 (actually November 2018), my Life has never been same again. Lately in September 2019, I had a follow-up MRI, and ligaments have still not healed. I still cannot walk without the fear of aggravating my ankle joint. But, I’m thankful that at least I’m able to walk.

I have never given up for sure though it crossed my mind on few occasions. It’s been extremely challenging but I have never stopped trying to get my life back together. I have recently begun to look up to sunshine.

32 thoughts on “What doesn’t kill you, makes you STRONGER!!!”